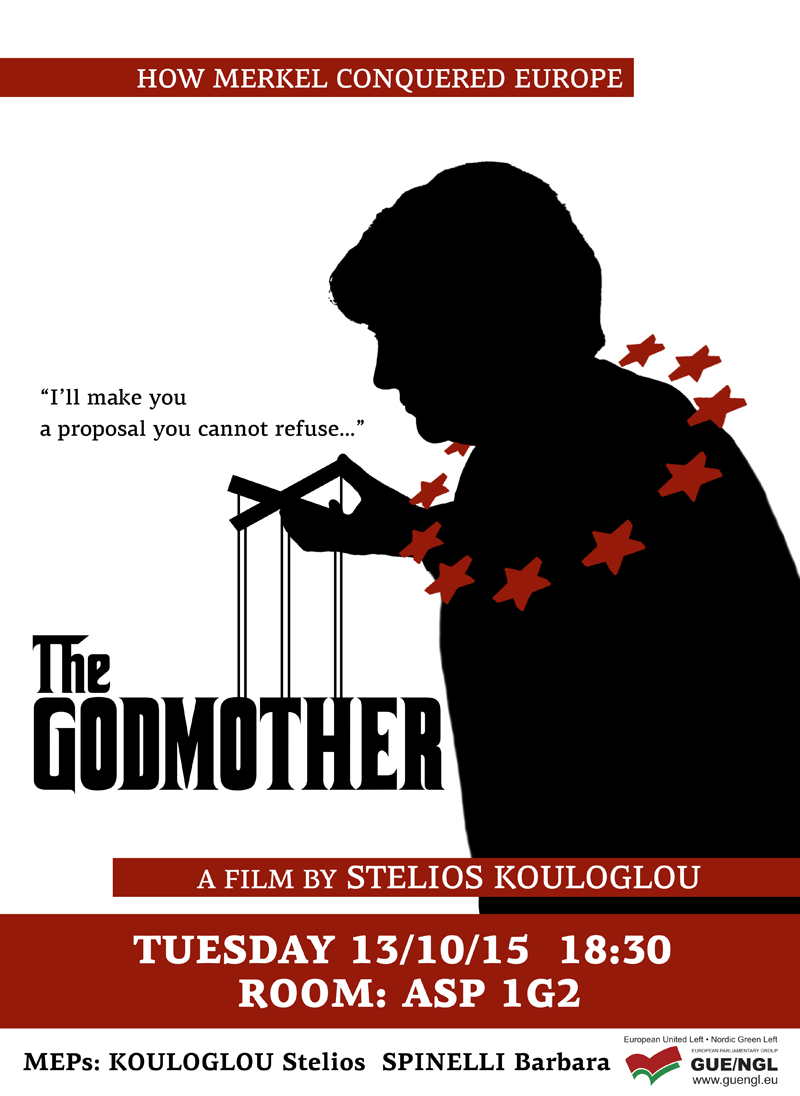 Gertrud Höhler, the author of the book “Die Patin” – “The Godmother” – says: there is a mystery surrounding Angela Merkel. A mystery because she wins and wins elections, without never offering any great vision, because she so manifestly lacks any emotion even looking back at the years in the German Democratic Republic – she was a mere observer, she never participated in a single demonstration in the months before the fall of the Berlin Wall – but still she never stops having success in politics and being popular in her country.

The film of Stelios Kouloglou shows very well this contradiction: it does this with humour, sarcasm and dramatic images of the devastating effects of Merkel’s austerity in Greece and in the other countries tamed by the troika.

I will try to sum up those contradictions since they are at the very essence of Merkel’s success, and constantly reveal a sort of double nature of the Chancellor. First of all, she always seemed to me a mixture of inflexibility, indecision, extreme cunning, and supreme mediocrity. The same person uses the indifference to values as a weapon, as asserted by Gertrud Höhler speaking in her book of the Chancellors systematic “value-abstinence”. At the same time she is able to literally devour one German political party after the other (first the party fashioned by Helmut Kohl, then the Spd, lastly the Greens with the exit from the nuclear energy; in the future she could even destabilise Die Linke on refugees policies). Finally, her mediocrity: it’s a talent she brings, sometimes and deliberately, to the extremes. It’s a talent well represented in the documentary of Stelios by her trivial remarks on holidays, or by what she said once about the German Democratic Republic (DDR) where she grew up: “What is most disturbing, in the DDR, is the fact that there is no decent yogurt”. That’s what she remembers of her adult life in the German communist system.

She can be arrogant and even cruel, as demonstrated by the negotiations with the Greek government on the memoranda. At the same time, she is the only European leader who tries to have sensible and rational policies on migrants. She is not only the “undercover Chancellor” described by Gertrud Höhler but she really is a two-faced person, if the circumstances so demand.

There are two sentences which show her amphibious nature. One of these is quoted in the film of Stelios Kouloglou, and it concerns the memorandum negotiated with Athens when George Papandreou was Prime Minister: “It must hurt!”, “Es muss wehtun!”. It is a terrible symbol of the austerity years. The other was pronounced in the most dramatic days of migrant’s influx, in the first half of October, when she opened the doors of her country to Syrian asylum seekers. In that occasion, she did not hesitate to clash with the right wing of her party. And she avoided the word “migrants”, preferring the more appropriate word “refugees”. She was sure of what she said: “Wir schaffen es!”. Which is the German equivalent of “Yes we can!”.

What is the link between the two sentences, apparently so divergent one from the other? They both lack any European dimension and vision. As far as austerity is concerned, the German dogma states that every country must fulfill its “homework” alone, before a real solidarity and transnational cooperation can begin: it’s the core of German ordo-liberalism. With regard to migration, she says something similar: Germany can cope with all on its own. Consequently, it means that all Member States can cope with everything on their own. Only en passant she admits that the European Dublin System is dead and gone, that the Union as such must change its whole approach on asylum policies. She has an enormous self-esteem and opinion of her country. She is substantially nationalist, in economy as well as in refugee and migration policy.

German newspapers reacted harshly to her slogan “Yes we can!”. Only two days after she uttered the sentence, they began to headline articles saying that she couldn’t at all: “No we can’t” – “ Wir schaffen es nicht”. Now she focuses all her attention, in the European Council’s meeting, on repatriation policies and on the control of the EU borders. How many Merkels are acting on the stage?